The Structure of Greek Drama (Comedy and Tragedy)

The Division of Plays into  Acts
The convention of dividing plays into acts has existed for nearly two thousand years. However, there is nothing inherent in the nature of dramatic structure that requires a division of a play necessarily into acts. In ancient Greek drama pays were written in a standard form in which passages of choral lyrics (stasima) alternated with sections of dramatic dialogue (episodes) but the action of the drama was more or less continuous. The very presence of the chorus provided a time continuum during the play's performance, Later playwrights were to adopt very definite three or five act structures. Some theoreticians have seen act structures in Ancient Greek Drama, both comedy and tragedy and attempt to prove it.

Aristotle believed that every piece of poetry or drama must have a beginning, middle and end. These divisions were later developed by the, Aelius Donatus in Rome, and given the names Protasis, Epitasis, and Catastrophe. This was the three-act structure.

Whilst Aristotle was not particulary explicit about how this was to be achieved, the three-act form can be found in his identification in how the Ancient Greek playwrights put together the principal component parts of a play: prologue, parados, episode, stasimon, and exodos. Prologue and parados were where the plot of the drama was introduced. Episode and stasimon referred to a dramatic scene (episode), these were followed by a choral song (stasimon), this basic pattern could be repeated as many times as was needed to fulfill the story. And finally the exodos was where the story was resolved. Thus in all this we have a beginning, middle and an end, or in essence the basis of a three-act drama.

The Oresteian Trilogy by Aeschylus itself might be considered to have the characteristics of a three-act drama.


Modern playwrights divide their plays typically into five acts, where the division is marked by a distinct difference in the plot from one time, scene, location and the next. This 5-Act structure is sometimes called Freytag's Pyramid. 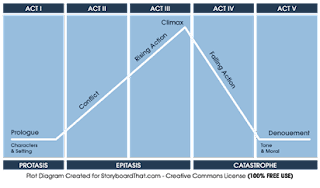 A scene change (subdivision of an act) is marked by a change of the characters on the stage.

An Act change is a conscious division placed within his work by the playwright marking a change in the action in his play such as rising action, its climax and resolution. Acts divide the plot of a play into manageable parts for the benefit of the audience: 3 acts would divide the story into beginning middle and end, for example.

In a Greek play there are several episodes (typically 3-5) in which one or two actors interact with the Chorus. They are, at least in part, sung or chanted. Each episode is terminated by a stasimon, A Stasimon (Stationary Song) is a choral ode in which the chorus may comment on or react to the immediately preceding episode.

Typical Structure of a Greek Play University of Tennessee
Archived

Oliver Taplin (1989). The Stagecraft of Aeschylus: The Dramatic Use of Exits and Entrances in Greek Tragedy. Clarendon Press. ISBN 978-0-19-814486-1.
https://archive.org/details/stagecraftofaesc0000tapl/page/n6/mode/1up

Sophocles; Thomas FRANCKLIN (D.D., Rector of Brasted.) (1793). The Tragedies of Sophocles, from the Greek. By Thomas Francklin ... A New Edition. With a Dissertation on Ancient Greek Tragedy, Etc. On The Parts of Antient Tragedy: Edward Jeffery. pp. 13–.

Structure and Outline of the Oresteia Archived
Agamemnon Structure

Analysis of Oedipus the King  Archived